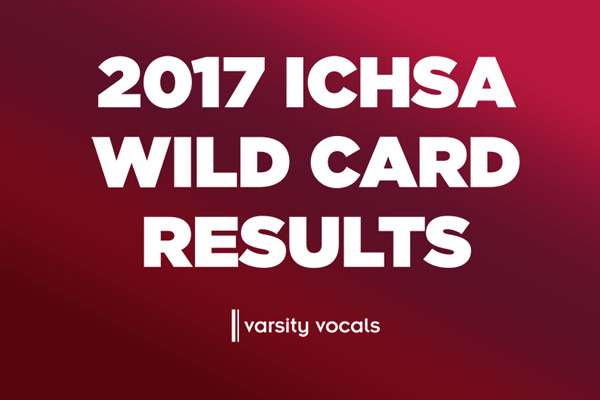 Congratulations to Vocal Point, who will be moving on to the ICHSA Finals at The Town Hall in New York City on April 21st.

John Bragle
John is a former member and coach of the Michigan State University Accafellas. He provided a cappella arrangements for MSU’s Capital Green and The Friars, as well as SUNY Buffalo’s Royal Pitches. He found his college a cappella singing experience very influential in training to be a musician and is happy to have the opportunity to give back. He joined the Interlochen Arts Academy faculty as Director of Choir and Instructor of Voice in 2008. Previously, he was the Director of Choirs for the Williamston Community Schools in Williamston, Michigan. John has been on the Interlochen Arts Camp faculty as an Instructor of Choral Arts since 2005. In the past, he has served as Visiting Professor at Northwestern Michigan College, Assistant Director of the Michigan State University Men’s Glee Club and Director of Choirs at St. Thomas Aquinas Church in East Lansing.

Laura Dickinson
Laura founded Groove 66 (now “Vybration”), at the Disneyland Resort with creator Deke Sharon, and is the only member to perform in all three female vocal tracks (plus appearances on the baritone and vocal percussion tracks). She is Vybration’s current music director and arranger, and has previously performed with Voasis (assistant music director) under Deke Sharon and Greg Jasperse and Voices Of Liberty in Epcot. She is especially proud to be the only female to perform in the male soprano track of her favorite group, m-pact. Laura is a singer and voice actress in Hollywood, best known for her extensive work on Disney animated hits, and numerous TV/film credits, including “Pitch Perfect” and “Pitch Perfect 2.” Laura’s debut album, One for My Baby – To Frank Sinatra With Love (2014) is available on iTunes and Amazon. www.lauradickinson.com

Kari Francis
Dubbed “the next generation of a cappella specialist” by “Pitch Perfect” and “The Sing-Off” vocal producer, Deke Sharon, Kari is an avid vocalist, composer, and educator based in New York City. She has shared the stage with Taylor Swift at the American Country Music Awards, collaborated with Imogen Heap in her “Earth” Project concert series, and competed on Season 3 of NBC’s “The Sing-Off” with Kinfolk 9. Kari studied composition with Lei Liang and Chinary Ung at UC San Diego and conducting with Mark Scatterday and Brad Lubman at the Eastman School of Music. While at Eastman she taught musicianship classes through the Eastman Community Music School, and was assistant conductor to the Eastman Women’s Chorus and the Amadeus Children’s Choir Chorale. Following her time at Eastman, Kari was a conducting fellow at the Young People’s Chorus of New York City. She directs “The Art of A Cappella” at CUNY Hunter College, an ensemble-class dedicated to exploring, arranging, and performing music in the contemporary a cappella style. In addition to myriad vocal projects, Kari has been an active lecturer and clinician since 2009. She routinely gives workshops on musicianship, arranging, and vocal percussion at music festivals and vocal camps across the States. Kari graduated cum laude and Phi Beta Kappa from UC San Diego and holds an M.A. in music education from the Eastman School. You can find her online at acappellaprofessor.com

Diana Galeano
Diana is a graduate of Florida State University, where she studied music education with an emphasis in secondary choral education. At FSU, she sang with 2009 ICCA Southern champions, The AcaBelles. Since graduating, she has worked as a high school chorus teacher, director at FSU’s summer music camps, and is currently the assistant director and proud camp mom at A Cappella Academy in Los Angeles, Calif. When she’s not teaching or taking care of her aca-children, Diana teaches at a cappella festivals, arranges, offers masterclasses to groups in the greater Boston area, and sings with semi-professional groups, Sound Off and The Hexachords, as well as the Tanglewood Festival Chorus.

Dave Sperandio
Dave has been working with a cappella music for more than 15 years as a performer, producer, and engineer. He founded a cappella production companies diovoce, VocalSource, and Vocal Mastering, and his work has appeared on releases from around the globe. Dave is the founder of the Alliance for A Cappella Initiatives and the creator of the SoJam A Cappella Festival, as well as the ‘Sing’ vocal compilation.